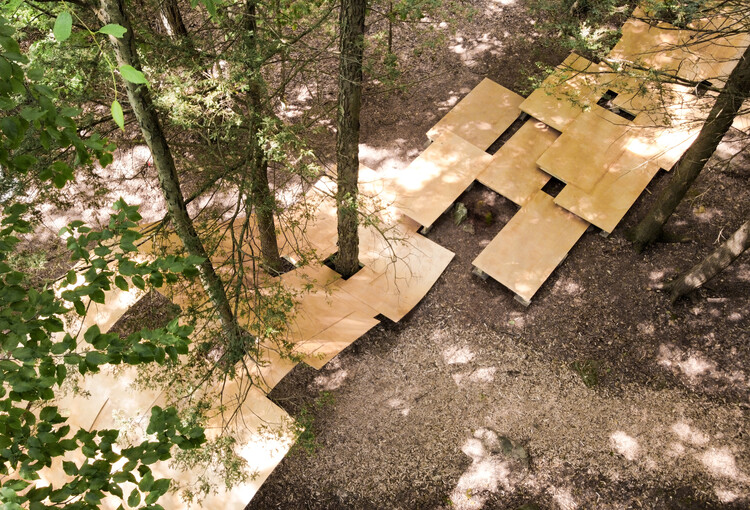 Text description provided by the architects. Peeking among the trees on the historic grounds of the 1969 Woodstock Music and Art Fair, Peak-A-Boo takes the form of a continuous series of laminated wood arches and bridges that form a pavilion and a flexible performance space.

The installation is the first programmable infrastructure in the woods of Bindy Bazaar since the 1969 Woodstock Festival and marks the start of the second phase of a three-year pilot program to develop an art and architecture festival on the site. Organized by Bethel Woods Center for the Arts, the project aimed to re-engage the historic site with design-build pedagogies and was fabricated/installed by students from Texas Tech University as part of the summer course, Architecture IRL , directed by Neal Lucas Hitch and me /te.

The design process began offsite at Texas Tech University, where students hand-modeled various wood laminate design solutions “quilted” with materials to scale. These models were then translated into computer scripts that allowed rapid prototyping and analysis. The final design consists of over sixty quarter-inch sheets of plywood, elastically deformed and laminated together to form a pixelated, bending-active structure. This “wave” of bent plates is then complemented by six digitally constructed glulam arches to mimic the natural flex of the wood cladding.

The structure, in its entirety, was made by students on site at the Bethel Woods Center for the Arts in the historic Bindy Bazaar – a craft bazaar and market used as the main entrance sequence for the 1969 Woodstock Festival which has been undergoing restoration since 2017. Construction began with the hand cutting of over 180 unique pieces, which were glued together to form the ribbed substructure.

Sheets of plywood were then attached along the laminated arched members with screws and fastened together with rivets. Conceptually, the project aims to bridge the complex binaries between analog and digital production modes; the structure was designed using computer numerical tools and analysis, but was constructed primarily using in situ hand tools.

The result is a slender structure, light as a feather but stiff as a board, cascading through the tree canopy like a wooden waterfall or a magic carpet. Although it was built in two weeks, the structure is integrated into the landscape – shrouded and perforated by forest flora – as if it had been there since 1969, waiting to be rediscovered.

Ultimately, the rationale for the structure lies in its ability to shape diverse and comfortable experiences: its arches creating the bandshells under which performers perform; her decks becoming tiered seats for members of the public; the pixelated surface providing an undulating canvas for dancing shadows seeping through the forest glade.