If Cantabrians have heard of Darby Vassall, their knowledge is more than likely centered on the story he told later in life of his childhood encounter with General George Washington. Shortly after arriving in Cambridge to take command of the Continental Army in the summer of 1775, Washington saw 6-year-old Darby swinging on the front door of John Vassall’s home. Darby was born into slavery there, as his mother, Cuba, was enslaved by John Vassall, while his father, Tony, was enslaved by John’s aunt and uncle, Penelope and Henry Vassall. When Darby was very young he was given to George Reed of South Woburn; after Reed succumbed to wounds sustained in the Battle of Bunker Hill, Darby Vassall returned to Cambridge, where he was reunited with his family at their former slaveholder’s home.

John Vassall and his family had abandoned their Cambridge estate for the protection offered to Loyalists by British troops in Boston in 1774 before moving to Halifax in 1775. The estate was commissioned as Washington’s headquarters during his nine-month stay in Cambridge. On that day in July 1775, when the general met young Darby in the front yard, he asked the boy to work for him. Asking him what his salary would be, Washington scolded him for his impudence; in telling the story, Darby often remarked that Washington “was no gentleman, [wanting a] boy to work without pay.

Although free in name, the Black Vassalls remained legally enslaved, but they remained at the Brattle Street estate and ruled it throughout the Siege of Boston. In 1781, the Massachusetts state legislature took control of the property, but agreed to pay Darby’s father, Tony Vassall, a dozen pounds a year as compensation. On Tony’s death in 1811, the legislature agreed to an annual payment of 40 pounds to Tony’s widow, Cuba Vassall, who died the following year. From being a 6-year-old negotiating with Washington to a 92-year-old preparing for the end of his life, Darby Vassall was a son, husband, brother, and father. He was a caterer, owner and activist with religious, political and economic societies. On his death in 1861 he was buried in the Vassall family grave in Christ Church, Cambridge, after nearly two decades bearing a note from Catherine Russell, granddaughter of Henry and Penelope Vassall, giving him permission to bury Darby in his family’s crypt. . 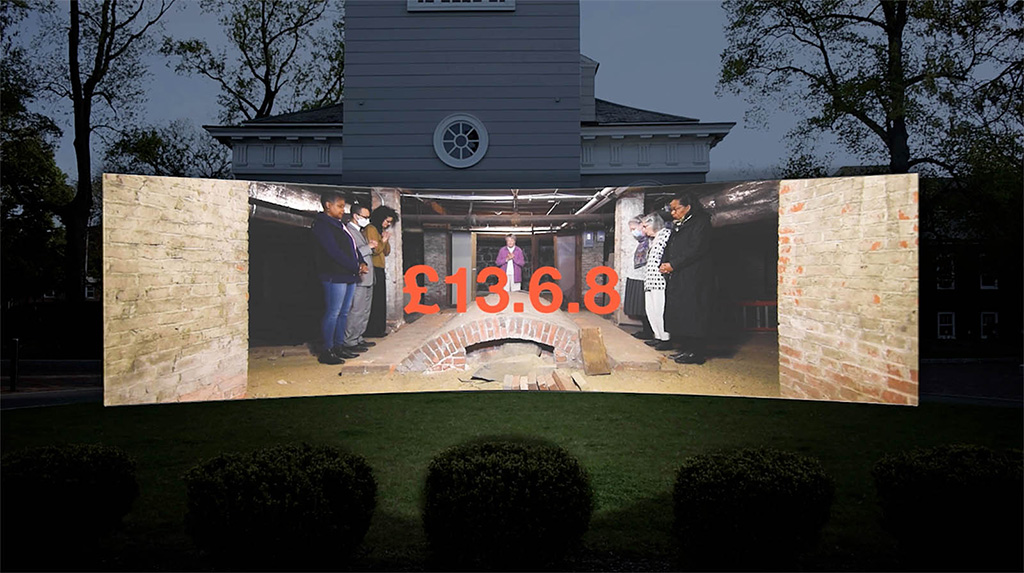 The installation can be viewed every evening from 6-8pm until November 6 (Picture: History Cambridge)

A temporary art installation on display on the lawn of Christ Church seeks to bring Darby Vassall’s long and rich life to a wider audience. In “Here Lies Darby Vassall,” Nicole Piepenbrink, recipient of the 2022 Design Studies Thesis Prize from the Harvard Graduate School of Design, examines the perceived invisibility of slavery in New England through the lens of Christ. Church, the final resting place of Darby Vassall. The inaccessible and largely unknown Vassall’s Tomb in the basement of Christ Church is shared with the public via a looping video projection telling the story of this church’s collusion with, dependence and profiteering from human trafficking. slaves who provided the economic foundation for the establishment and growth not only of this church, but of Cambridge, Massachusetts and New England. In doing so, Piepenbrink highlights the connections between plantation slavery in the Caribbean and on the southern continent, the northern fortunes built on the backs of enslaved laborers, and the philanthropic efforts of many prominent individuals and families in the region.

‘Here Lies Darby Vassall’ plays nightly from 6-8pm until November 6 at Christ Church, Cambridge. On October 27, Piepenbrink will discuss his project as part of the fall lecture series co-sponsored by History Cambridge and the Longfellow House-Washington Headquarters National Park. This program is free and open to the public, but registration is required and can be found here.

History Cambridge began in 1905 as the Cambridge Historical Society. Today we have a new name, a new look and a whole new mission.

We engage with our city to explore how the past influences the present to shape a better future. We strive to be Cambridge’s most relevant and responsive historical voice. To do this, we recognize that everyone in our city knows something about the history of Cambridge and that their knowledge is important. We help people share the story with each other – and weave their knowledge – by giving them the floor, the mic, the platform. We illuminate where historical perspectives are needed. We listen to our community. We live by the ideal that history belongs to everyone.

Our theme for 2022 is “How Does Cambridge Work?” » Make history with us at cambridgehistory.org.